Reaching Kraków is relatively straightforward and the city is well served by air, rail, and road, both domestically and from other European destinations. But it’s worth bearing a few things in mind, especially if you’re flying with certain budget airlines or coming in by car 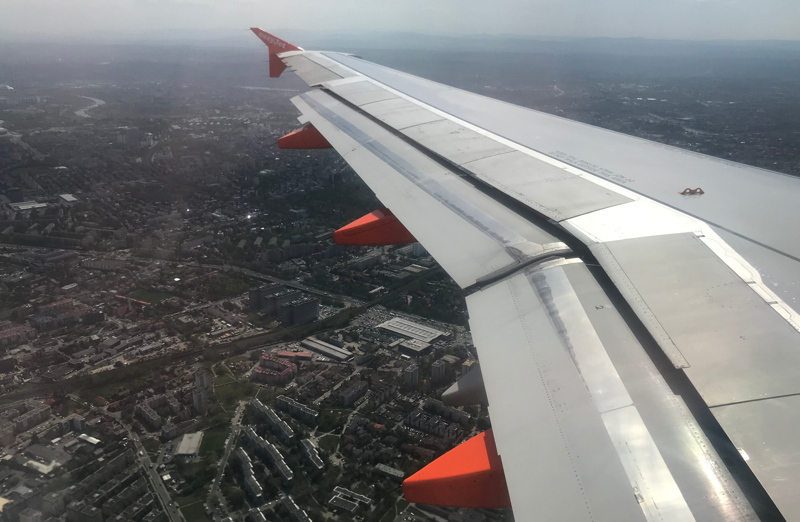 We have a specific guide on how to get to Kraków if you are travelling from the UK, but read on for advice on what to expect when you arrive in Poland, including the difference between the two airports that serve Kraków.

Kraków also makes a great base for visiting other Polish cities and a handy hub for a number of cities in neighbouring countries.

Most air passengers will arrive via Kraków’s John Paul II International Airport and, if possible, this is where you want to land. But a number of budget airlines fly into the airport at Katowice, which is further away.

We have a dedicated page with information about flight times and airlines serving Kraków.

The majority of companies serving Kraków are budget airlines, so it’s possible to pick up a cheap ticket provided you book early enough. As with any flight, prices to Kraków and availability can vary enormously. Easter flights, in particular, are likely to sell out many months in advance. Use a comparison site like 12go and start looking roughly three months ahead of your departure. You’ll often get a better deal if you can be flexible when you travel. 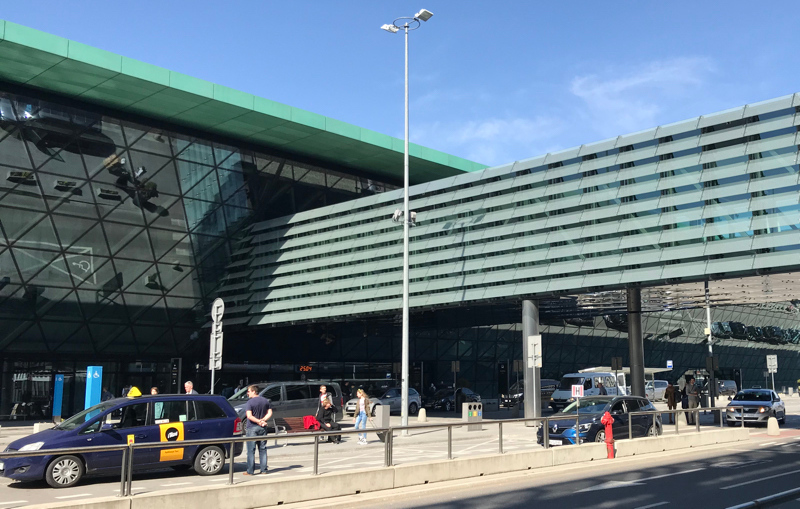 John Paul II International is a smart, modern airport, located a mere 15km outside the city, with excellent transport links. There are daily flights from a handful of other Polish cities, most noticeably Warsaw, as well as services from many european countries. Both EasyJet and Ryanair run a budget line from the main UK city airports. North American travellers can fly direct from Chicago, whilst visitors from the Far East will have to change in Dubai or at a european hub.

See our full guide to John Paul II International for full information, including details of how to get from the airport to the city centre.

By comparison, Katowice International is also served by a number of budget airlines from across europe, but is 110km to the north west of Kraków and lacks the excellent transport infrastructure of the official city airport. It has three busy terminals: C handles all arrivals, whilst the others are for depatures – A is for non-Schengen and B is for Schengen flights. All terminals have facilities for snacks and finances, whilst terminal A has a newsagent and post office, and B has a pharmacy. The Katowice airport website has details of services available. Anecdotally, travellers have reported heavy-handed security.

You can read more about Katowice itself on our How To Travel From Kraków To Katowice page.

To get to Kraków, you’ll need to get the shuttle bus or private hire. The bus takes two hours and, at time of writing, costs 44zł for a single ticket. It’s cheaper to book in advance from Matuszek. Depature times are dependent on your flight, rather than a regular schedule. You’ll be dropped at the main bus station, which is covered in our guide to arriving in central Kraków.

Buses and private hire can also be arranged through Pyrzowice Ekspres for 78€ (at time of writing) for up to 4 passengers. Cars take roughly 90 minutes to reach the city centre and must be booked at least five days in advance.

Finally, it’s definitely worth checking pre-arranged transport into Kraków via GetYourGuide, as you will often find a package that’s more convenient and better value for money.

Kraków Główny, the city’s main station, is served by trains from most Polish destinations, as well as from the capital cities of neighbouring countries. There are direct trains from Berlin, Vienna, Prague, Budapest, Bratislava, and Kiev. But you’ll have to change if you’re travelling in from Minsk or Vilnius. Many of the longer journeys are overnight, with sleeping cars an additional option. The airport train from John Paul II International also arrives here.

The station has an excellent location, a mere 5-minute walk from the Old Town, making it a fantastic point of arrival. The station is fairly new and, as it is built into a large shopping mall, has pretty much everything a traveller could need. See our guide for full details about arriving in Kraków.

The Polish rail network is run by a number of companies and you should be aware that tickets are not interchangeable. Assume that a ticket is only valid for the particular journey you bought it for. Other than that, the whole system is fairly easy to understand. Note that queues are common, so leave plenty of extra time if you’re buying at a train station. Stations in larger cities will often have a dedicated counter for the more expensive PKP InterCity tickets (see image), which can speed things up, and you can also buy from a ticket machine in larger stations. 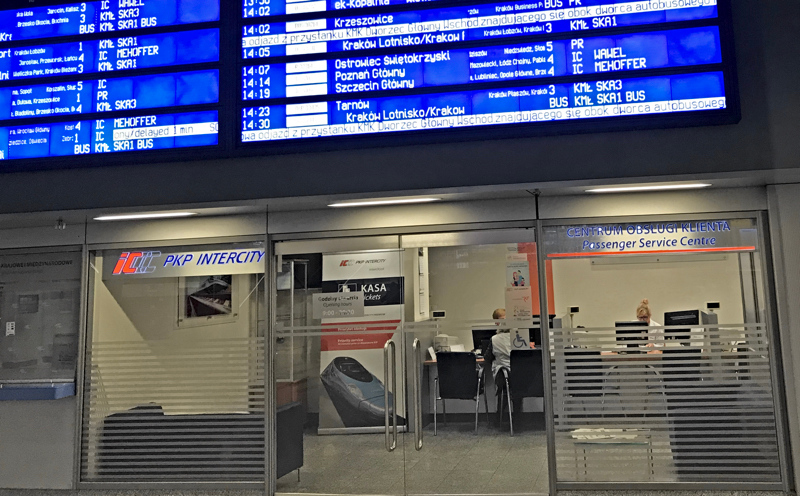 The network is comfortable and reasonably fast. It’s also cheap, depending on the type of train you choose. The 289km journey from Warsaw to Kraków can be done in less than 2.5 hours on the faster trains, at a cost of 35€ for a second class ticket. The slower trains take an hour longer but cost only 14€ one-way. You can work out routes and costs via the comprehensive network website.

The fastest trains are operated by PKP InterCity and are marked on timetables as EIP (Express InterCity Premium). You need to buy these tickets in advance – up to 30 days ahead – as seat reservations are compulsory. But you can buy online from outside Poland. First and second class tickets are available. Snacks are available on board the trains.

The same firm also runs a budget intercity service, marked as TLK (Twoje Linie Kolejowe) on timetables. As with the EIP trains, these also need to be booked in advance. The service is second class only and you shouldn’t expect any snacks on board. Any routes marked with IC (InterCity) will be considerably slower but no cheaper, and can be ignored.

Regio also run some express services (marked REG on timetables), which might be worth considering, and there are more localised operators, such as Koleje Małopolskie, who run the service to the airport.

In practice, the choice is actually very simple. Just put the route you want into the online timetable and choose the price and journey time that suits you best. 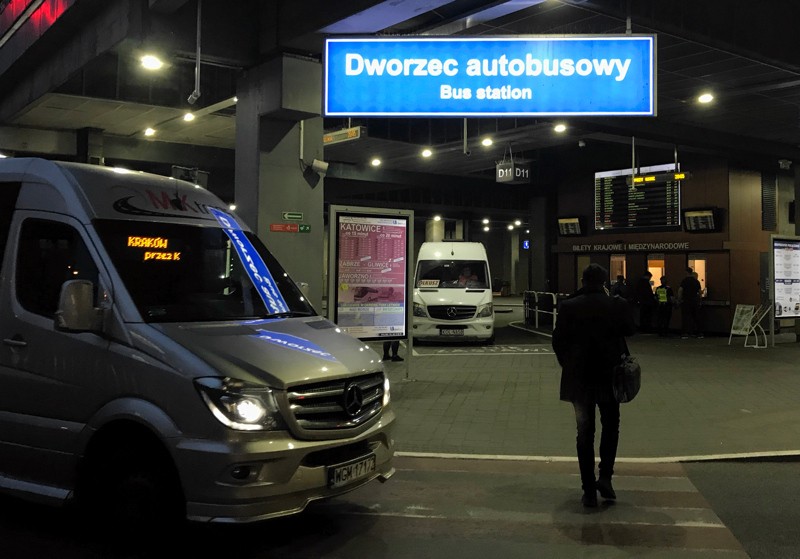 If you’re travelling by coach, you’ll almost certainly arrive at Kraków’s Dworzec Autobusowy, the bus terminal built into the main train station. Though a little seedy, the location is conveniently close to the Old Town and a superb place to arrive in the city. See our guide to arriving in Kraków.

As with trains, a number of operators serve Kraków. Flixbus has a massive network across Poland and into the rest of western Europe, and RegioJet has a more limited reach. Tickets can be bought from 12go.

These days, coaches are generally safe, spacious, and comfortable. Poland has a reputation for bad roads but this really depends on the route, which drivers will anticipate. For comparison, an overnight coach from Warsaw to Kraków will take roughly 4.5 hours, rising to just under five hours during the day, whilst Prague to Kraków takes roughly eight hours.

Costs vary wildly depending on distance, time of day, and demand for tickets. However, you can almost certainly get from A to B very cheaply, if you’re prepared to put up with the extra journey time.

Similarly, where you buy tickets will vary, depending on where you are. I’ve found 12go a reliable service for collating the fastest routes with reasonable prices. By bundling in train and plane routes, you are able to work out the best trade-off. The phone app is excellent but note that mobile tickets aren’t available for every journey.

Most coaches will have a toilet, especially on longer journeys. Otherwise, they will make fairly regular stops. Don’t assume that snacks and refreshments will be available on board, although it’s likely that you’ll also stop at services every few hours.

As mentioned, Poland has a reputation for bad roads, despite ongoing efforts to bring them up to scratch. All the same, the A4 route in from the west is pretty good, offering a direct five-to-six-hour drive from Berlin, Dresden, and other key German cities. Be prepared for roadworks in the final stretch from Katowice and expect to pay a small toll if you want to use the motorway.

The journey from Warsaw, via the S7 road, takes just under four hours and you can expect roadworks here too. There’s no direct route from Vienna and Bratislava in the south, and coming in from the east is a bit of a slog as well. However, chances are you’ll pass through some beautiful countryside and roadside facilities are generally good.

There are a number of car rental companies operating in Poland. Quickly check availability and compare prices to hire a car using the search box below.

You’ll need a valid driving licence and registration, proof of ID (such as a passport), and a Green Card to confirm that you are fully insured. You are required by law to carry a warning triangle and fire extinguisher, and the car needs headlamp beam deflectors and a sticker to identify country of origin. The alcohol limit is so low that drinking should be completely avoided by drivers. Seatbelts are compulsory and there are heavy spot fine for all traffic violations. Finally, it is compulsory that all motor vehicles use dipped or headlights or daytime running lights, day and night, all year round.

Driving in Kraków itself is a challenge. The Old Town is largely pedestrianised and parking can be a problem. So, if you intend to drive, book accommodation with a space included and use public transport once you’ve arrived.